In search of Joe Gould – part 1

Blackwell fans probably remember the characters of Joe Gould (the West Village bohemian who wandered around gin mills in the 50s and was trying to write the Oral History of Our Time) and Joseph Mitchell (the New Yorker reporter who wrote a piece about Gould, then mysteriously stopped writing but continued to work at the paper for 30 years). In Blackwell Convergence, you could go to a tavern named the Minetta and look at Joe Gould’s portrait hanging on the wall.

What you might not know is that Gould, Mitchell, the Minetta, and the portrait actually existed. 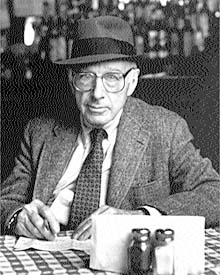 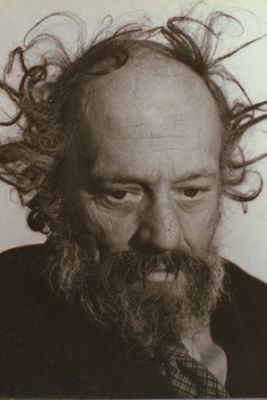 The real life Mitchell and Gould.
I won’t go into detail about their lives here (that’s what Wikipedia is for), but something about their stories absolutely fascinated me. I can’t explain it. I was absolutely inspired. In my early days as a developer I would spend long afternoons in the Minetta, sitting under the Joe Gould portrait, hashing out the plot details for the whole Blackwell series. It’s no wonder that the two men ended up being featured so heavily in the story.

In 2008, the Minetta underwent massive changes. It was bought out, gutted, and completely renovated. It’s fancier and much more expensive now. You need to reserve your table several weeks in advance if you want to walk through the door. Suffice to say, I don’t do my design work there anymore.

Flash forward a few years later. My wife and I decide to go there on our anniversary. We make the reservations well in advance, we dress nice, we enter the place… and the Joe Gould portrait is gone. Not just moved to another spot, but gone.

I asked the hostess where it went. She didn’t know what I was talking about. I asked the waiter. He knew nothing either. I asked to speak to the manager. He dutifully came to my table and told me that there was no such thing. Nobody at the restaurant ever heard of the name “Joe Gould”, let alone know where his portrait might be.

This was a mystery. One that has bugged me for several years. I let it go as just one of those things, but then last week I had enough. My epiphany (ahem) was triggered by reading a wonderful biography of Joseph Mitchell (called “Man in Profile.” Read it. It’s excellent) and it got me wondering again. Where did this portrait end up? I simply HAD to know.

So today, I decided to try and search for it. And since this is the age of sharing, I will be keeping a record of my search on this website:

THE SEARCH FOR JOE GOULD – Day 1

So, it’s back to the source. Even though nobody working at the Minetta could remember that the Joe Gould portrait even existed, somebody there OUGHT to know who the restaurant’s current owners are and how to contact them. So I called up the restaurant and navigated their phone menu. I eventually found my way to the General Manager’s voice mail and left a message explaining what I was trying to do. Since the manager’s voicemail message was “Greeting 3 not recorded. BEEP!” I’m not hopeful that this call will be returned.

1pm
I try calling again and get the same result. On a whim, I call back, but instead of choosing the “General Manager” option, I choose “Reservations.” This, I figure, will at least get me through to a human being. Success! I explain my situation to the reservations guy (who, naturally, had never heard of the Joe Gould portrait). He told me that the reason why I haven’t been able to reach anybody was because the restaurant was closed for lunch on Mondays and Tuesdays. “Call back at 4:30,” he told me. “Someone should be able to help you.” Righto. I hang up. Guess I should do some work on Technobabylon or something.

5pm
I call the Minetta and try the General Manager again. “Greeting 3 not recorded. BEEP.” That’s a big nope. I call back and try reservations. I got a different person this time, and so I begin my spiel. Here’s a rough version of my conversation:

Me: Hi. I’m hoping you can help me out with a bit of a mystery. I’m looking for a painting that used to hang in the Minetta, before the big rennovation. The painting of Joe Gould? Have you ever heard of it?
Guy: I’m afraid not. I only just started working here.
Me: That’s okay. I tried calling the Keith Mcnally Restaurant group, but I can’t seem to find a number for them. I was hoping someone at the Minetta could help me.
Guy: Well you’re in luck. This number handles calls for Keith Mcnally, but we can’t give out their phone number.
Me: Oh.
Guy: BUT – this does sound fascinating. You’ve got me curious as well. Give me your name and number and I’ll ask around the office.
Me: Oh. That’s great! Thank you very much.
Guy: I’ll give you a call back in a few days.

So… that’s where things stand now. Will update again once I know more.